Home Xulashada An Open Letter to the President-Elect

Please accept my warm congratulations on a victory that I hope will serve as a moment of unification and progress for our beloved country as per your slogan “Soomaali heshiis ah, Dunidana heshiis la ah”. During the past five years, President Mohamed Farmajo has been accused of sowing division with ceaseless, rift and animosity amongst the people. And while your predecessor certainly made his mark, you have the unique opportunity to rectify his shortcomings as president. To avoid the previous pitfalls, Mr. President you need to be straightforward with the Somali people and present clear holistic plans strategizing your course of actions. The plans should detail on what, how, and when the government is ready to achieve the goals of your vision. The world is waiting to see what you do and is a little worried.

Mr. President, I believe that that you should prioritize the following sectors:

Youth and Security: Somalia youth population have not been afforded the opportunity to develop to their full potential, and access the opportunities that enable them to grow, develop and prosper as fully engaged, responsive and productive citizens. In fact, Mr. President, the large youthful population has been vulnerable to various national problems, including violence, immigration, and terrorism. In terms of security and the prolonged civil wars, the youth have been exploited by clan agendas and terrorist groups. Your government should prepare a plan to ensure the security and safety of the country by empowering the youth.

You have been elected on 15th May, an important day for the Somali Youth. It is more crucial than ever to understand and enhance the role of the country’s young people. The youth need to become active citizens and be provided with necessary services by your government to be protected from vulnerability and radicalization activities and to lead positive, productive youthful life.

Entrepreneurial development and formal jobs: Since ‘unemployment’ and ‘survival’ have been cited as the main reasons for participating in the informal economy, the implementation of policies that facilitate labor supply will reduce the size of unemployment in Somalia. First, these policies should be directed at transitional participants, that is, job seekers and most graduates who work in the informal economy while participating in the active search for full-time employment. Your government through the Ministry of youth can facilitate work by creating a favorable environment for the private sector to create quality jobs.

You’ll be hearing many and often contradictory opinions on issues of Economic development. I urge you to listen carefully to advises from all quarters. The economic and public financial management agenda of the nation is too important to be neglected. Special attention to debt relief issues will bring great rewards for your administration and for our nation. The previous government has asked the International Monetary Fund, IMF, to extend its financial support by three months to 17th August. Your government must work hard to strengthen government institutions, particularly in terms of tax collection and controlling public spending. The Country’s debt could fall to $557m or about six percent of the GDP as early as 2023 which will assist the FGS to attract more funding from international partners and help develop its private sector.

Somalia’s real GDP decreased by 0.3 percent in 2020. This is the lowest growth over the last economically unstable decade. A significant factor has been the triple threats that include persistent effects of 2019 flooding, locust invasion, and the COVID-19 crisis as this value differs from the corresponding growth in 2019 (a 3.3 percent increase). Insecurity and natural shocks are the key current risks. With Global financial system becoming fragile in a high inflation, households across Somalia are feeling the pinch of rising food, energy prices, transport, and health owing to record-high inflation of 6.45% in April 2022, core services inflation has increased for four straight months. Mr. president, be keen on curbing inflation to prevent high consumer-price growth from becoming entrenched in the economy for long-term.

Among other challenges that you will face Mr. President in the next 6 months, include: Mediating conflicting interest groups: 1) Union of Peace and Democracy Party (UPD), 2) clans seeking their share of the infamous 4.5 system, and 3) major actors – FMS presidents and some of the presidential candidates – who because of their support to you feel entitled to certain positions in the new government. Each of these interest groups has demands, first among them is wielding an influence on the appointment of a Prime Minister and the subsequent nominations of Ministers. You need to assess the strengths and weaknesses and nominate a Prime Minister that can complement you. In addition, Mr. President, you need to create fair and transparent criteria for choosing a Prime Minster:

In the wake of the election, the country and its new leadership face many challenges and opportunities in the quest to restore Somalia in its rightful place among nations of the world. The opportunity is also a solution to one of the above challenges – building cooperative relationship between Somali government and the International Community (IC). The IC is eager and willing to aid Somalia’s reconstruction as evidenced in its new IC framework – “Somali-Owned Reconstruction and Development Program”. Mr. President, think of economic development and Security.

Mr. President, please form an advisory board to support you. The criteria should be 1) Somali citizen, 2) have academic and professional experience on an area of advice, 3) understand Somali politics, 4) give a recommendation only when asked in their area of expertise, 5) puts public interest before private ones, and 6) have credibility among the public as ethical who have promoted Somali interest in the past. No leader, despite his personal prowess, can succeed alone. Keep in mind that no successful person does it on his or her own.  Do not be too proud to rely on Providence and surround yourself with capable and honest individuals, not only the old faces we know, but advisers who will be willing to tell you what you need to hear and not just what you want to hear. Listen to those with whom you disagree as well.  Learn to work with other duly elected government officials, FMS leaders and members of the opposition.  Listen to the needs and concerns of the Somali people and consider them carefully when making decisions.

Congratulations once again on your election as the 10th President of Somalia. I wish you all the best and pray for your wise leadership that will unite Somalis and steering the country into the path of sustainable peace and progress.

Hashim Sheikh Abdinoor
The author is an economic statistician based in Mogadishu. Email: hashim.abdinoor@gmail.com
Twitter: @hashimabdinoor 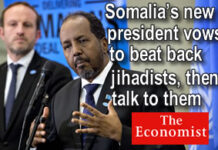 Somalia’s new president vows to beat back jihadists, then talk to them 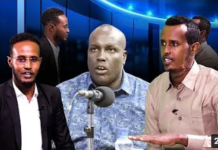 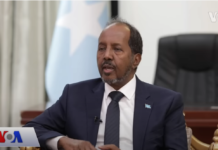 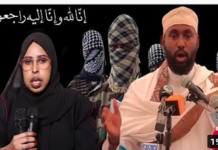 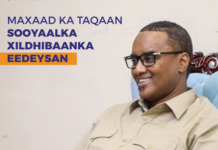 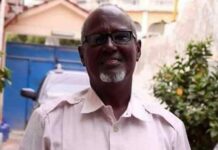 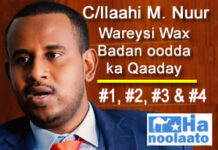 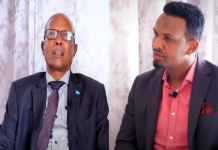 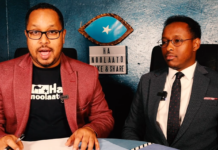 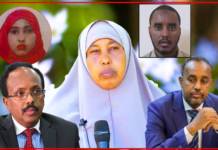 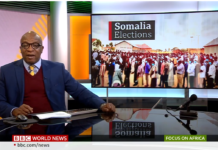 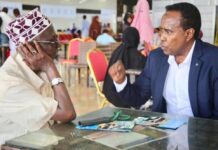