Ismail Sheikh Khalifa, human rights activist and a veteran journalist at Kalsan TV. Ismail had just left the TV studio where he recorded a weekly show he hosted, when his car exploded a few minutes after he drove off. The bomb had been planted while he was at work. He was critically injured and was flown to Istanbul, Turkey, for treatment. Amnesty International found no evidence that an independent investigation has been carried out into the attempt on his life.

Munasar Mohamed Abdi is a journalist who was working for the privately-owned Dalsan Media in Mogadishu. He was threatened by members of an influential clan in relation to a series of reports he did on an incident in which a man from the marginalized Bantu clan was burnt alive because the Bantu man’s nephew had married a woman from “a more powerful Somali clan.” “Members of the powerful clan of the woman who married the Bantu man were not happy with my reporting. So, they threatened me with death. I was in hiding for a few days, but I could no longer bear the pressure.”He fled Somalia in October 2018 and is now seeking asylum in Sweden.

Nur Ismail Sheikh was an editor in Mogadishu for privately-owned Shaaciye news website. He told Amnesty International that he wrote articles and posted short videos that were critical of senior government officials on his Facebook account. Police arrested him without a warrant in November 2018. He was detained for 12 days for “inciting the public” and was denied access to representation. Nur continued his work in spite of the harassment, but after being threatened by National Intelligence Security Agency officials he was forced to flee the country in November 2019.

Ali Adan Mumin is a popular journalist working with privately-owned Goobjoog Media Group. On 28 May, he received summoning him to the police station. Upon arrival at the police station he was arrested for “violating the rules of journalism” and spent the next four days in detention without being formally charged of committing any crime. During that period, police officers kept pressuring him to confess to various allegations regarding his Facebook posts. He was presented in court and accused of insulting public officials, disrupting government work, spreading propaganda and being “dangerous to the public”. Other journalists started speaking out about his arbitrary detention, and soon after he was released pursuant to a court order.

After his arrest in May 2019, it became difficult for him to work freely. On 16 June, Facebook sent him an email that his account was deactivated. He has not been able to access the account to date. He told Amnesty International that it had over 60,000 followers and the Facebook page had a huge impact on his work- both as a journalist and as a social media influencer in Somalia. In July 2019 he told Amnesty International that he loves his country and would never leave Somalia. But in January 2020, he had to flee the country in January 2020 due to threats from a National Intelligence Security Agency official. He is currently in exile in Turkey.

Zakariye Mohamud Timaade is a former Universal TV journalist who was based in Mogadishu. He received threats from Al-Shabaab from time to time, but his biggest fear was of the government. He also faced threats for other reports on sensitive security issues. NISA began calling him about this reporting, and they even began to call his mother to ask him to stop critical reporting. His brother, who was also a journalist, was killed for his reporting in 2012. “On 1 June 2019, I was attacked by armed men while visiting my mom’s house in Wadajir, Mogadishu. That’s when I decided to flee Somalia.” He left the country in June 2019. He is now seeking asylum in Sweden.

Sabir Abdulqadir is a journalist with Somali Cable TV in Kismayo. Sabir was interviewing members of the public about the first anniversary of the election of Somalia’s President Mohamed Abdullahi Mohamed (Farmajo) in Kismayo when he was arrested by Jubaland regional state police. “They asked me to put down my camera and then took me to the Criminal Investigation Department (CID) centre in Kismayo and was then transferred to the “Fiat” detention facility. Sabir was kept in detention for four days and was released on 11 February 2019. He was neither taken to court nor shown an arrest warrant before his arrest. He said police had beaten him badly while he was in detention and questioned him on why he had filmed a vehicle carrying charcoal. Sabir said he was unable to operate in Kismayo as a journalist after this incident and decided to flee to Mogadishu. He later fled Mogadishu for another country due to continuous threats to his life coming from Jubaland security forces.

*Female journalists have a particularly difficult time in Somalia, as patriarchal values penetrate deeply in Al-Shabaab, government institutions and even at places of employment. 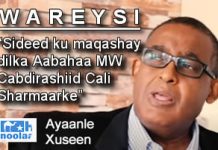 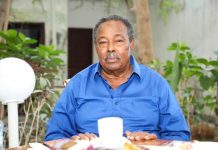