The SNA said it carried out anti-terror operations against Al-Shabaab fighters in the Lower Shabelle on Sunday.

The 16th Danab Commando Unit said that the operation targeted fighters in the Toratorow, Aliyow and Barrow in the Lower Shabelle region. ‎

The elite commando unit said they destroyed Al-Shabaab checkpoints in the area that the Al Qaeda-linked militant insurgency group uses to extort money from travellers.

The SNA added that six Al-Shabaab fighters were arrested during the operation and that it wrested control of the troubled regions from Al-Shabaab.

‎Somali government forces often conduct such operations against Al Shabab in areas and municipalities in the Lower Shabelle region where they exert considerable influence. 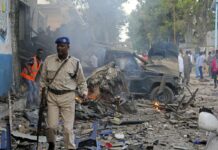