Home English News A rebounding Somalia is ready to welcome back those who left, ambassador...

Somalia’s economy is growing. Its government is stabilizing. And for any of those who have left it for places like Minnesota and are thinking of moving back, the country is ready for them.

That was the message Monday from Minister of Foreign Affairs Ahmed Isse Awad, who spoke to a friendly audience in a small chapel at Augsburg University about the progress the nation is making as it essentially tries to build a government from scratch.

At his talk, which was organized by Global Minnesota, Awad pointed to several hopeful signs that Somalia is turning a corner after decades of war and conflict, one of the biggest of which comes from the International Monetary Fund (IMF). After several years of work, Somalia is on the brink of receiving massive debt relief from the IMF that would open the door for the country to start making new investments and put more money into its schools, infrastructure and efforts to create jobs for young Somalis who desperately need more opportunities, Awad said. Ads By Google

“Economic activity is picking up throughout the entire region,” he said. “To sustain that progress we need the diaspora to engage more in Somalia, to continue to contribute.”

As part of the debt relief process, the IMF continuously monitors reforms and progress made by the Somali government. In a February review, the IMF found that over the past two years “growth has rebounded, inflation has slowed, and the trade deficit has narrowed.”

However, regulators warned that more still needs to be done to reduce poverty and ensure the economy is resilient.

Awad said he is hopeful that Somalia will receive debt relief as early as next spring.

Much of the economic progress the nation has made has come from the support sent home by those who have left and thrived in places like Minnesota, Awad said. For several years, the nation’s economy has been receiving more in remittances from expatriates than from all the humanitarian and development aid it has received from the rest of the world.

That’s a sign, he said, of how successful Somalis will be when they are given an opportunity.

Awad, who left Somalia for Montreal in the early 1990s after civil war broke out, was named the Somali ambassador to the U.S. in 2015 and reopened the nation’s embassy in Washington for the first time in 24 years. He was in Minnesota for his son’s graduation from Mahtomedi High School.

Awad said much of the government is now administered by people like him, who either grew up or prospered in other countries before returning.

For the first time in its long history, the country has a chance to grow “organically,” he said, rather than as it was set up by a colonial power.

“We’re coming together now to really decide what kind of government we want,” Awad said. “People are debating and arguing. It is a slow process. It may not be neat or clean, but in the long run it will save us.”

The biggest challenge the country faces is what to do with its youth, he said.

Well over half the country’s population is under the age of 25. The quality of education is still low, and opportunities are very limited, Awad said.

The country now needs the skilled workers and professionals who can provide the services that can essentially build up the nation’s middle class. Those people are starting to return in a “Somali rebirth,” he said.

“It started some time ago and it is bearing fruit, but it’s just the magnitude of the need,” he said. “We’re rebuilding a whole nation that has collapsed and has not had these institutions for a long time. We need all kinds of skills and all kinds of expertise.” 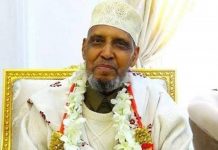